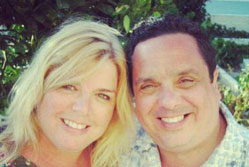 Many people start their own business because they dream of riches, while others simply want to earn a living from something they truly love. The latter is true of Liverpool-based Grateful Dead fan John Marsden and his wife Julie (right), who set up The Melwood Beer Company in mid-2013.

"For many years I'd dreamt of running a microbrewery business with my wife, Julie. I'm passionate about beer, but I don't like the mass-produced, watery, gassy stuff you get in pubs and supermarkets.

"In March 2013 we opened The Melwood Beer Company. We make high quality beers that taste great and are totally natural - we don't use chemicals. To start the business, I used earnings from my work as a self-employed hospital operating theatre technician and Julie worked as an administrator at Alder Hey Children's Hospital. 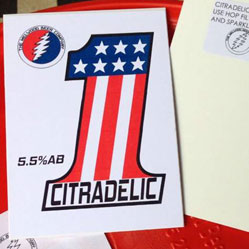 "Our premises really are special. I'd mentioned to a patient that I was looking to open a microbrewery and she told me about an old dairy near her house, which until recently had been home to one of the North West's first craft breweries.

"After seeing them, we just had to have them. They were perfect, and in such a beautiful setting near to Knowsley Safari Park - some days you can actually see the rhinos and zebras. Our offer was accepted and as a result we started the business sooner than anticipated. It all happened so quickly.

"We fitted the place out with all the necessary tanks and equipment and worked with a brilliant local welder. We also had to source supplies, create our website and develop our branding, as well as try to win our first customers, but come the end of March our first supply of beer was ready.

"We installed a five-barrel system, which enabled us to produce up to 800 litres per brew, which is 20 casks, each containing 72 pints. We had four fermenters, which gave us the capability to brew up to four times a week [ie 80 casks], providing the demand was there."

In December 2015, John and Julie moved into The Kennels - a larger building on the safari park which used to house the estate's gun dogs. The extra space enabled John and Julie to finally do everything they were planning - with dedicated rooms for bottling, kegging, casking and tasting. In May 2016, the were visited in their new premises by the crew of Food Unwrapped who filmed the brewing of a special beer. 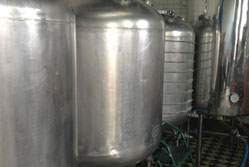 "Music is my other great passion and I play Hammond organ in a Grateful Dead tribute band. All our beers are single malt varieties and their names are inspired mostly by bands, singers or songs.

"We do an 'Icons of Rock' series and our first was Mojo Rising [The Doors/Jim Morrison], then there was Fools Gold [The Stone Roses]. Julie also developed an ale called Knowsley Blonde. A while ago, she made a beer called Father Ted, in honour of her late father. We also produce one called Citradelic, which is very popular.

"Our branding incorporates the famous Grateful Dead lightening bolt skull logo, which was originally created by the band's soundman Owsley Stanley in the 1960s. Sadly, he died in 2011, but I emailed his family to ask permission to use the logo and they said yes.

"We plan to start selling branded clothing through our website, which will hopefully help to raise our profile. I used our home-based computer to create our website and branding and I produce all of our pump clips, stationery, labels, etc at home. As well as saving money, I enjoy doing it. I get a real buzz from seeing the pump clips in public.

"The name of our business is inspired by Liverpool FC's training complex, which is close to our home. Brewing beer involves a lot of hard work, but it doesn't feel like it because I love it so much. It's not like a job. Our beers are very good - the reaction has been brilliant - and with our passion and commitment, I'm confident our business will do well. We've sell to wholesalers in Yorkshire and Greater Manchester and our sales in Merseyside continue to grow.

"I don't know whether the business will make us rich, but I'd be happy if it generated a wage for us both. If it does make us rich, that would be the icing on the cake, but just to be able to walk into a pub and see people enjoying our beer means we've already achieved a long-held dream."

John and Julie's passion has paid off. In February 2018, their journey took another leap forward when they opened their own micro pub. They acquired an empty unit on the high street in Prescot and opened on Valentine's Day 2018 after securing the necessary planning permissions and licence. Taking inspiration this time from the town's connection to William Shakespeare, they have named the pub The Bard. True to the original ethos of the company, it serves high quality cask ales, kegged craft beer, artisan spirits and a selection of wine and cider.