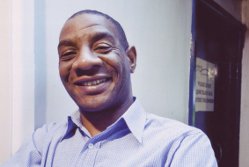 It was during yet another stint inside while awaiting trial that repeat offender Derek Jones got his big idea: a special email service connecting prisoners to friends and family on the outside. Mark Williams finds out how forming a business helped Derek to turn his life around

Some 85,000 ex-offenders are released from English and Welsh prisons each year. Almost half of them (46%) re-offend within 24 months (60% of those on short sentences re-offend within a year), costing the UK taxpayer about £12.75 million per day.

Apart from wanting to change your ways, the key to 'going straight' is finding a job, of course. Those who do so are as much as 50% less likely to re-offend.

Few ex-offenders choose to start their own business, but Derek Jones is one exception. He grew up in Bath in the 1970s. "I've fond memories of my childhood. Although I was a black kid growing up in a white adopted family, I didn't have any issues about that," he says.

"I was hanging around with the wrong crowd and it began with minor stuff - petty theft, bottles of pop, etc. I first got into trouble with the police when I was 11 and up until the age of 21, I must have been in custody 15 times. My adopted parents had no idea what I was getting up to, but that changed when the police got involved."

Laziness was a big part of it, confesses Derek. "I wanted everything to come easy - I didn't want to work for it. I wanted to do something else with my life, but I thought that was out of reach."

Soon, Derek graduated to car theft and burglary. "Bath's a small place really, there aren't many black people either, so soon people knew what I was getting up to - and that included the police." The first couple of times he got caught, Derek said he felt some shame, but soon he was out committing more crime to "get money to buy things and have a good time".

Derek was on remand for many months during his youth. "I went away a few times to youth offender units and got sent to a detention centre, too, which I didn't mind, if I'm honest. I couldn't see things through the eyes of the people I was stealing from. I didn't care.

"Later, I ended up in prison. I got 18 months for burglary and later served four months for driving while disqualified. I wasn't scared while inside – although there are some seriously nasty people in there. I'd done a lot of boxing while growing up, so I could look after myself. The thing is, if you want to waste your life, prison's the right place for you."

While Derek was on remand for six months in 2003, he experienced problems communicating with friends and family. That was when he had his 'eureka moment'. "Email. Simple. I knew demand would be huge. There would be no cost to prisons or prisoners; the sender outside would pay.

"I needed to do some research into how my idea could be turned it into a viable business. At the time I was doing a teaching course, but I mentioned my business idea to the teacher and she allowed me to go to the library to read books about starting a business."

Derek's case (alleged burglary) was thrown out for lack of evidence. "I was 36 and standing on the steps of Winchester Crown Court with no money, but at least I had my idea. I was determined to stay out of trouble."

After making it back to the West Country, support was hard to come by. "Some people just couldn't quite understand my idea, while others said it couldn't be turned into a business. They were wrong."

Derek went to see his local business support organisation and over four months did various start-up courses. He also put together a business plan. He was also given a £2,000 grant by Bristol-based enterprise agency BRAVE. "As well as encouragement and advice, BRAVE gave me a mentor called Mike Groves, who was very helpful. We used to meet once a month."

It took Derek two years to get his business - Email a Prisoner - off the ground. Launched in 2007, he has since sold his email service to over 130 prisons of all categories. Email a Prisoner has also launched a phone service which helps prisoners stay in touch with family members. "It's taken time, but now I've been able to get my message across to the right people, response has been brilliant. I got my first trial at Guy's Marsh Prison in Dorset in 2008, proved the concept and won the business, but getting other prisons on board was difficult at first."

Derek says he hasn't personally encountered any prejudice because of his past. "I'm open about it: I broke the law, many times, but I was punished and I've changed my ways. As far as the business goes, being an ex-offender helps.

"I've fully left crime behind now, because I wanted to change my life and I've something else to focus on. Staying out of trouble also involves staying away from people I once knew and places I used to hang around."

Derek has gone on to become director of social enterprise SALT Academy. He is spearheading a new initiative, the Virtual Business Academy, which helps ex-offenders to transform their ideas into businesses.