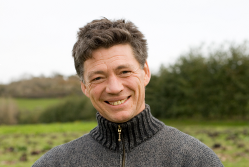 Few business people would describe themselves as a “left-leaning anarchist”, but being different partly explains why Guy Watson, founder of award-winning Riverford Organic, has achieved so much. Mark Williams finds out how his belief in organic farming turned into a prosperous business that delivers food boxes to tens of thousands of UK homes each week

Born in Totnes in 1960, perhaps it was inevitable that Guy Watson would end up earning a living from the land. His parents took over running Riverford Farm in Buckfastleigh in Devon in 1951. “My father had been demobbed and studied agriculture, as did my mother. I helped out on the farm from an early age.

“It’s become a cliché, but at school I was pretty dyslexic. Studying didn’t come easily. I was in the lower streams of the local comprehensive, but ended up going to Oxford to study agriculture and forestry sciences and got a first, so I didn’t do too badly,” he smiles.

After graduating, Watson worked at Riverford, before briefly pursuing a career as a management consultant - first in London and then in New York. “Learning about business was interesting and proved valuable subsequently, but I didn’t belong in that world,” confesses Watson. “It was the mid-1980s and corporate greed was everywhere, but I viewed it as ethically moribund. I didn’t aspire to the same things as my colleagues.”

After leaving New York, Watson went sailing for six months, before returning to Riverford. “I thought I was just coming back for Christmas, but I’ve been here ever since.” In 1986, Watson decided to try to make a living out of organic vegetables. “I totally believe in organic farming. You should be able to eat produce without worrying about what’s been sprayed onto it. Organic farming is better for the environment too, of course. Totnes is quite an alternative place, so I thought there would be demand. Also, I knew I couldn’t work for someone else.”

A three-acre Riverford field produced enough vegetables to supply local shops. More land was used the year after, and by 1990, the year Watson got married, he could count numerous wholesalers and supermarkets as customers.

Back to the future

In 1993, it wasn’t just a case of Watson wanting to change his business - he knew he had to. “With my management consultant head on, I could see what was happening with the supermarkets and I was constantly being driven down on price. If I’d have stayed as I was, Riverford might not have lasted.”

The solution was to start weekly deliveries of ready-boxed organic produce to 30 households nearby. “I didn’t come up with the idea,” admits Watson. “And many people thought home deliveries were old-fashioned. But I thought it was worth a try and after talking to people on their doorsteps, I believed I was onto something.” 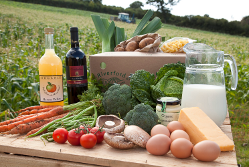 In 2005, Riverford opened its acclaimed Field Kitchen Restaurant and the business has since published two recipe books. Modestly, Watson cites luck as a key reason behind his success. “It’s down to doing the right thing at the right time. OK, I had a good idea and some business acumen, but you need luck. It’s also taken an incredible amount of dedication, determination and hard work.”

Riverford now offers 100-plus products, grown at five cooperative-member farms (including one in France). Some 40,000 organic boxes are delivered each week to homes throughout the UK. Customers can also order Riverford organic meat, eggs, bread, milk and other dairy products, drinks and deli goods from the farm shop.

The business went through a tough patch, Watson admits, partly because of the recession and partly because the media has become much more scathing about organic food. In mid-2007, Riverford’s rapid growth came to a “fairly sudden stop” and it was time to overhaul the business and cut out waste in all areas to make it more efficient.

“Now we’re enjoying growth again and we’re a well-run and profitable business - which is no small achievement these days,” Watson notes.

Father of four Watson lists his hobbies as tennis, surfing and tightrope walking. “I started doing it a few years ago. Why? Tightrope walking requires my full concentration, which helps take my mind off the business and other things.”

What of the future? “I considered turning Riverford into an employee-owned business, but a customer-owned cooperative seems more likely, maybe in a few years’ time. I won’t sell the business to a venture capitalist firm,” he stresses. “I live in a modest house and drive a modest car, I’m not materialistic. My views on business are unconventional. Business shouldn’t be about the relentless drive to maximise profits ―- there’s got to be more to it. It should also be about doing good things in the world… That’s my view anyway.”