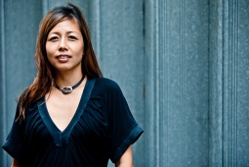 Some call her the UK's first lady of tech. Wendy Tan-White is co-founder of DIY website maker Moonfruit, as well as a tech start-up investor, mentor and champion for women in a sometimes unwelcoming industry. As she explains to Mark Williams, sometimes you've got to fail to succeed

Perhaps it was inevitable that Wendy Tan-White would end up working in tech. Born in Salford in 1970, her family moved to Cumbernauld in Scotland for her dad's job when she was two.

"Few people worked with computers then, Dad was ahead of his time. We moved to Reading when I was nine, and Dad got a job with Racal, which became Vodafone. Mum did a degree and ended up working in IT, too."

At grammar school, the teachers filled pupils with self-belief. After A-levels, she did a degree in computer science at Imperial College, London. "I went from an all-girl school to a course where only seven out of 120 students were female. It was all very new and exciting. We were using state-of-the-art equipment, and the internet - it was only 1989."

Ford sponsored Wendy's studies, and she gained holiday-time work experience at the company's Dagenham plant. "I asked friends about starting a business, but the thinking was very much that you needed to gain experience first. I ended up becoming a tax analyst for Arthur Andersen, then the world's biggest accountancy firm.

"It felt like I'd sold my soul. I went from believing I could do anything to photocopying tax returns. Thankfully, I did learn about the financial side of running a business."

She still longed to start her own business. "Eirik Pettersen was a friend from university. He was working for an IT consultancy. I'd already done some early work on what was to become Moonfruit, and Eirik said he'd join me if I could attract enough funding. This was 1998.

"Richard [Duvall] said if I stayed one more year at Egg, he'd help me. Fortunately, he allowed me to work part-time, which gave me income and enough free time to develop my own business. Seed investment came from Richard, Eirik, myself and friends and family."

The idea behind Moonfruit was to remove barriers to technology and enable people to share their passions online.

"We wanted to enable more people to build their own website quickly, easily and cheaply. I worked with a small web development agency in Soho I'd used for Egg, which is where I met my husband Joe [who became Moonfruit COO/CFO].

"We raised £400k from a venture capital fund. They also helped us package our prototype and business plan for larger investors. We then raised £6 million from other investors. People could see we had an idea that could potentially be rolled out all over the world."

Moonfruit launched in January 2000, offering both Free and Premium versions of its website building software. Customers could take a free trial, and then choose which service was most suitable for them.

"By the end of the year, we had 100,000-plus users and 60 employees - but we grew too quickly," Wendy admits. "When the dot-com bubble burst at the end of that year, we were forced to scale back to just Eirik and myself - it was a really tough time. I had to let go a lot of people I was close to, including my future husband and his mother."

Getting back up again

The pair bootstrapped their way through, and by 2004 they had ten employees and were again generating profit. "Customer advocacy has always been our main source of growth," explains Wendy. "Retention rates are extremely high, and there is an active community. Most new customers come from recommendations from existing users."

That same year, Wendy helped set up Zopa, Europe's first peer-to-peer lending website. "I was married by that time and had my first child, so my husband took over running Moonfruit with Eirik.

"Joe raised investment totalling €14m and bought [French company] Gandi, and the two businesses merged. By 2008, the value of the business had tripled," Wendy recalls.

During her time away from Moonfruit, Wendy did a textile design degree at Central St Martins, before becoming marketing director of Gandi in 2008. "Things had changed with the rise of social media sites such as Facebook, so some radical improvements were needed for Moonfruit."

In 2010, Moonfruit accepted $2.25m from a US investment bank - capital that was used to take the business forward. Further investment followed in March 2011. In 2012, The company was acquired by Hibu (Yell.com in the UK), to help it transition into a digital services provider.

These days, Wendy has turned her hand to tech investment - first as a general partner at start-up accelerator Entrepreneur First, and currently as an adviser for deep tech investors BGF Investment. She is a member of the UK Digital Economy Council, and sits on the board of TechCity UK.

Wendy shakes her head when asked whether she plans to retire any time soon. "I'd like to spend more time with my family, sure, but do nothing? No way. I have to be involved in some type of project. I love investing in other businesses, and acting as a mentor so others can benefit from my knowledge and experience," she smiles.