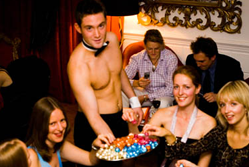 The soar-away success of Butlers in the Buff (the 'Male Order Company') has been built upon the fact that there are many women (usually groups of) who like to be waited on by handsome, toned, young men. And they will pay for it, of course

Stacey Lynn is one-third of the business's management team. "Back in 2001, our MD, Jason Didcott, left the navy after 15 year's service and the idea of creating a naked butlering service came to him one day. The girls raved about the first event, so Jason recruited a few other guys - including Will Jones, our other business partner - to do more.

"At first it was almost a hobby, a bit of a laugh, really. Over time, they realised they were onto something. They then asked me to join the team to take care of PR and marketing."

Stacey continues: "All our guys are attractive, toned and scantily-clad, which makes a good news story. Early on we had a lot of press coverage, which helped us to recruit more butlers and the business quickly took off."

Back then, the trio had other jobs to do. 'Butlers' was an evening and weekend business - which didn't even have an office. As Stacey confesses, plans for the business were often hatched in the pub.

Advice was sought from [Bristol-based enterprise agency] BRAVE. "It was a free consultation on what setting up a business actually involved. The adviser made excellent suggestions and we were very glad of the advice."

As Stacey recalls, that first year was a steep learning curve. "There was no model to follow - no one had done naked butlering before! Taking bookings… recruiting butlers… accepting payment, we had to think about a lot of things. There were employment law questions, too, because we were only employing men at the time, as well as health and safety rules with which we needed to comply."

As more and more bookings came, Stacey was able to drop to four and then three days per week at her 'day' job. Over the following years, the business has grown massively.

"There are a few competitors, but they don't have the infrastructure or our established brand," she adds.

"Butlers in the Buff even got name-checked in EastEnders. We have an extensive network of more than 1000 butlers worldwide, so if someone's sick or can't work, others can take his place. The smaller outfits don't have that. We strive to be the biggest and best and keep our standards high."

The business has now become a franchise. Stacey says "It seemed a natural development, after all we've built a strong and successful brand. Becoming a franchise will involve hard work - like starting another business. You're selling a major investment, so it's all got to be exactly right: legal contracts; marketing; operations manuals, etc.

"Franchising is a great way to grow. Already we have diversified. We now supply butlerettes for corporate events - such as awards ceremonies and film launch events - and provide butlers for LBGT events."

So what advice does Stacey have for those about to set off on their entrepreneurial journey? "Get good advice early on. Even a half hour of free advice from someone who knows what they're talking about can be incredibly useful," she concludes.

This case study was first published in 2010. Butlers in the Buff now has franchises in America, Australia and Canada.

Mick founded BuzzedUp in 2007 after recognising the remarkable power and potential of inbound marketing for ambitious business owners.&nbsp; , full_html...

Eight tips for successfully working with family
How I thought of the unique business idea for Send My Bag
Start-up inspiration: ten new business ideas