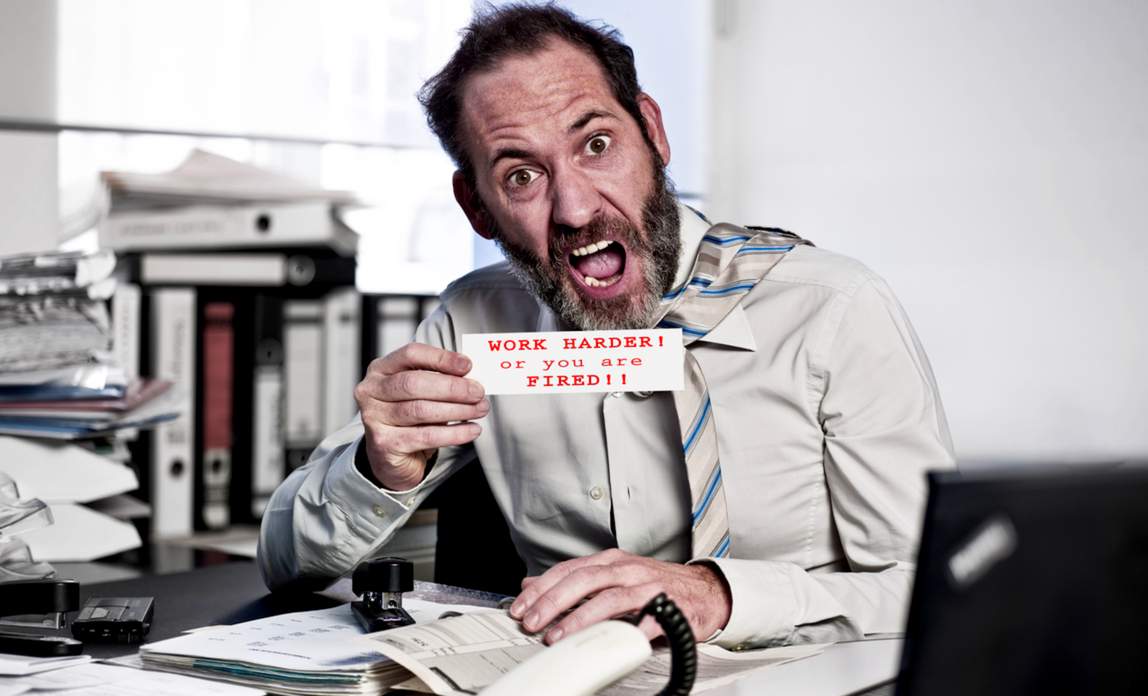 You might previously have been lucky enough to work for a good boss and know what a difference that made to your performance and state of mind. Alternatively, you might have worked for a terrible boss, someone who drained all your good will and enthusiasm and made you dread work. So what do employers do to become known as a bad boss?

"They say that people don't leave the job, they leave the boss, which is true in many cases," says Kate Russell of Russell HR Consulting, which provides HR advice, resources and employment law training to SMEs.

"Being a bad boss has many consequences. It can totally demotivate employees, which damages productivity. Staff can be absent more often - whether they're genuinely ill or not - while staff turnover rates can be significantly higher, which can increase recruitment costs. If being a bad boss includes breaking employment law, you risk ending up at a tribunal, of course," she cautions.

Common mistakes made by bad bosses

Russell says bad bosses make common mistakes, including a tendency to micromanage. "Some employees need a lot of support, but most of us prefer to be trained to do the job, then left to get on with it, knowing that help is available if needed. But bad bosses can interfere unnecessarily.

"In other cases, some wrongly assume that employees know what outcome is required, without giving clear direction. Employees' key pet hates include bosses who don't communicate clearly and in a timely fashion, as well as employers who don't value or listen to their opinions. Employees also need to be given regular, fair, evidenced feedback. Not recognising their good work by thanking them, or worse - stealing the credit for their achievements - is appalling."

Honesty, it seems, remains the best policy, too. Russell adds: "Someone I know worked for a guy who told his staff he couldn't give them a pay rise because the company was doing badly. Shortly afterwards he bought himself a top-of-the-range sports car. The result? About 80% of the employees left. They despised him for lying."

According to SME HR consultant Steve Satterthwaite (right) of HR Potential some employees don't react favourably to their bosses' "overdone passion". "It's most damaging for employees who are more conflict-averse. Most small-business owners are seen as a 'head of the family' with two sides - 'nurturing' and 'critical parent'. They can swing more to one than the other according to their 'parenting' style. In my experience, small-business owners struggle most when faced with difficult people-related issues or situations."

Why are people bad bosses?

Russell says managing employees is very challenging and some owners just aren't cut out to lead or manage people. "Owners can lack experience, knowledge, skill or the necessary personal qualities. Sometimes they're insecure or just plain stupid or arrogant. You must realise that employees aren't carbon copies of you - people have different motivations and ways of working.

"The smart manager works out how to get the best out of each team member and creates the right environment. There are some truly horrendous bosses, who know they're bullying and being unpleasant, but in many other cases it's unintentional. People management doesn't come naturally to everyone.

"Some owners don't enjoy managing people; others are primarily task-orientated. It doesn't mean they don't like people - they just tend to focus on getting through their 'to-do' list. Being a good people manager often takes self-awareness, self-honesty and perseverance to overcome your natural tendencies."

How to become a better boss

According to Satterthwaite, independent support can prove invaluable if you lack people-management skills. "It can also be quite a challenge when a small business begins to grow and the owner relies more on others to manage staff. This is where external support can also help you to anticipate and reduce conflict."

As a general rule, Satterthwaite recommends that owners and managers treat employees as they would expect to be treated. "This, combined with the right core policies and external advice on tricky issues when necessary, can prevent serious problems," he adds.

With commitment and hard work, Russell believes that bad bosses can improve. "It's hard to change someone's personality, but they can improve their skills and behaviours. There isn't a one-size-fits-all solution to managing staff - employees are individuals and businesses have different circumstances, too. Management workshops and books only provide a useful starting point."

When good people leave a small business - whether it's because of their boss or not - as Satterthwaite observes, it leaves a huge hole, which can take time and money to fill. "Astute bosses don't tend to be bad bosses, they're mindful of the consequences of their actions. They 'lock in' good employees with financial incentives, engaging work, respect, praise when due and some good old-fashioned TLC when necessary."

Create lawyer-approved contracts in minutes. Get 50% off your first month or contract by using code DONUT22

Stay on top of your expenses