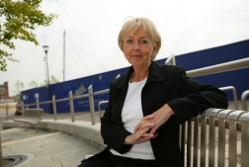 It's rarely plain sailing for a new business owner, but some entrepreneurs face more complex challenges than others. Sue Tumelty tells Mark Williams her story

After leaving a senior human resources (HR) post in Hertfordshire to relocate to Bristol, Sue Tumelty started her business, The HR Dept, in 2002. "I was working ad hoc for several blue chips when I spotted a gap in the market to provide similar services to smaller firms at an affordable price.

"Most businesses are started by passionate entrepreneurs who are focused on their products or services and the drive to make money. Few know who to turn to for specific, practical and reliable HR advice."

Sue began working with small enterprises in the South West and the business grew rapidly. Her husband, Mike Stevenson, soon left his job as the managing director of a manufacturing firm to become the financial director at The HR Dept. A converted barn near to the couple's Winterbourne Down home became the business's initial head office.

Soon, a lot of business was coming in from beyond the South West. "I was determined the business would not lose its key strength - offering a local and personal service. So, instead of hiring associates, I planned to develop a chain of regional offices run under licence by experienced HR professionals."

The first was trialled in Manchester in 2004 and more soon followed in Bedfordshire and Warwickshire. "Now there are over 65 licensees offering HR services in 83 territories across the UK and Ireland and that number is still growing."

Gemma, Sue's daughter and now managing director of the company, granted a Master Franchise for Australia to a Sydney-based business partner in 2017. Several Australian franchises have since been taken up. Sue was “extremely excited to see the HR Dept brand going international and it was something we'd never have dreamed of when we first started."

Sue was born in Castleford in 1950, but grew up in the East Yorkshire seaside town of Filey. "Grammar school girls then were pushed to become teachers or nurses - but I wanted to become an actress, so I went to the Birmingham Theatre School."

She had no dreams of running her own business, even though her parents ran a local dance hall. "I learnt a lot about commitment, vision and the importance of treating people properly from them," she reveals.

After drama school, she landed various small acting roles and toured with a theatre group. "A friend suggested that while 'resting' I work for a telephone answering company in Manchester, so I could practise accents all day and have time off for auditions.

"It was fun and I was promoted to supervisor. I left but rejoined the company in Bristol many years later as a PA even though I couldn't type quickly. I was promoted to line manager, moved into training and then onto HR."

Sue's story is perhaps made all the more amazing by the fact she has been profoundly deaf for 25 years. "I didn't realise I was losing my hearing at first - I just thought people were mumbling. Then my daughters - Gemma, who is now managing director of The HR Dept, and Jodie, who is a primary school teacher - suggested I see a specialist.

"Consequently, I was given an analogue NHS hearing aid, which picked up a lot of background noise. I was a single parent, so couldn't afford to buy a better one, so my lip-reading and body language-reading skills became much enhanced."

Her outlook on life didn't change. "No one's perfect and hearing is not the be-all and end-all. I'm incredibly fortunate, because I'm otherwise healthy," she smiles.

Humour helps, she says. "Sometimes at home I give silly responses because I haven't been able to properly make out the question - which will often happen if a profoundly deaf person can't see your mouth. Now I have a brilliant NHS digital hearing aid with built-in loop system, which is great when I'm at the bank, for instance. I also have a device that creates a loop, which I can use in meetings for improved hearing. I have yet to find a good mobile phone to suit me, though, so I prefer to rely on texts and emails."

Sue, a Fellow of the Chartered Institute of Personnel and Development, wrote The CV and Interview Handbook, which was published by Which? back in 2009. Determined to practise what she preaches, her business offers flexible working, private health insurance and even at-cost breaks in Sue's holiday villa in Cyprus to all staff, many of whom are working mums.

She doesn't believe being deaf has proved an obstacle in business. "I don't think of myself as disabled. Yes, it can be difficult sometimes. I now work in the office at home more because it's quieter, so I can hear better on the phone and people don't have to keep walking over to my desk to ask me a question."

Some reactions to her deafness are predictably boring. "I can be at a networking event and tell a person I'm deaf, to which they think they're being hilarious when they come back with 'Pardon?'. Usually, I just smile, even though many times I feel like shouting at people for being stupid. There are other idiots - not my customers, I must stress - who treat me as though I'm simple. The phrase 'deaf, not daft' springs to mind," she concludes.