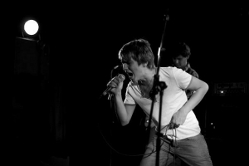 Musician, producer and business man Jamie Giarraputo lives by the Italian motto 'vivere senza rimpianti' - live without regrets. At just 26 years old, he set up his own band and independent music label with his brother. Mark Williams goes along for a jam

Most musicians have done some weird and wonderful 'normal' jobs before making it big. Ozzy Osbourne worked in a slaughterhouse, Rod Stewart was a gravedigger, Madonna worked at Dunkin' Donuts and Kurt Cobain was a janitor.

Jamie Giarraputo might not have made it that big yet, but he once worked at Very. "I got sacked for playing football in the stockroom," he smiles. "I also worked at Virgin Megastore in Sutton, was a teacher for learners with disabilities, then a tea boy at RAK Recording Studios, where I worked for [legendary rock producer] Mickie Most."

Jamie now co-owns and runs his own record label, Undead Collective Records. Prior to this, Jamie set up a recording and rehearsal studio, Venti Venti Media, in Ewell Village near Epsom in Surrey. "I met my business partner, Dave Weller, through our girlfriends, who are sisters," Jamie explains. "The business was born after a discussion over a bottle of whisky. Dave and I realised we were similarly ambitious, although he's a graphic and website designer, so we thought we'd merge music and design into one company." As Jamie explains, Venti Venti is Italian for 20/20. "Why? It's about having perfect vision to achieve great things. We also just liked the name, so it stuck."

Jamie was born in 1984 in Sutton, Greater London. His mother was a further education lecturer. "Mum worked her way up to vice-principal. She inspired me by showing me that with hard work, drive and ambition you can succeed.

"When I was growing up, my dad managed a souvenir and gift production company. Now he imports olive oil from Sicily, his birthplace. I was inspired to work for myself by him. The thing that appeals most about running my own business is the freedom it gives. I'm not interested in being extremely rich; as long as I'm earning a living by doing something I love, I'm happy."

Jamie was an extremely hyperactive child with a short attention span, but he enjoyed primary school. Not so, high school. "I couldn't concentrate on course work, I can only focus on things I truly enjoy. I wasn't a fan of their archaic rules or the testosterone-fuelled environment. I wasn't a cool kid nor was I a geek. I drifted between groups, but I made some amazing friends.

"I got into a lot of trouble, too," he admits. "I wasn't a bad kid, I just had dreams and knew they wouldn't be achieved by learning Pythagoras' Theorem."

At 15 Jamie learned how to play music. "My brother was in a band and for my birthday he gave me a bass guitar. I never looked back. Soon I was performing live. Because I was young I wasn't allowed in venues before or after we played, but I gained a lot of real-life experience, which calmed me down a bit."

Jamie toured a lot and his band supported future stars such as Keane. They also had a small record deal and released an EP that was "extremely well received and led us to work with [Grammy Award-winning producer] Matt Howe."

These days, Jamie performs live with his brother, Justin, as the lead singer of Brightlight City.

"I love music because it's full of emotion," he says. "It can make you feel happy and then with a simple key change you feel sad. Without getting all 'Bono' about it, music brings people together, which is powerful."

Jamie and Justin aim to grow their current business by supporting bands from their local area. "I'd also like to have a mobile studio bus, so we could travel to record musicians wherever they are."

Revenue comes from using state-of-the-art digital technology to record demos for aspiring bands and performers. "Since opening, we've done well," says Jamie. "Word of mouth has helped to bring us most of our business. It's definitely been a learning curve."

Despite his tender years, Jamie hasn't faced any prejudice from those in the business world. "I'm not sure 26 was that young to be running a business these days. If you have good ideas and the means to make them successful, age is irrelevant. Our main obstacle was sourcing investment, but we had a sound business plan, which helped. In the end we got the investment from close friends who believed in the venture."