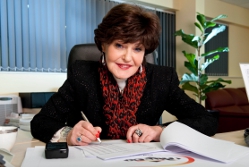 Hilary Devey started out checking tachographs in a haulage firm. She went on to form a multi-million pound business and featured as a high-profile small-business adviser on various successful TV shows. She told Simon Wicks what it takes to be a successful business owner

"The thing that's really amazed me is how many people start businesses with hearts so full of hope and heads full of cotton wool. They think because they've been good at a hobby they can make it into a business."

Hilary was forthright in her opinions. "I get lots of requests from people wanting help with their businesses," she continues.

"50% of the time I tell them, 'Don't put your house on the line. This is a failing business and it's going nowhere'. I owe it to them and to myself to be honest."

The long haul to business success

Toughness, making the difficult decisions and focusing on the bottom line were central to Devey's business philosophy. Born in Bolton, she grew up with business in the atmosphere. "My parents always ran small businesses," she recalls. "I grew up with a degree of acumen around me, though running a business was never what I particularly aspired to."

After school, she worked at a haulage company checking tachographs, and slowly "gravitated" towards logistics and transport. From there a corporate career opened up, first with Littlewoods, then Tibbett, Britten and Scorpio and finally seven years with retail distributor TNT. In 1996, she formed her own company, Pall-Ex.

Her revolutionary idea was to provide central hubs for distributors where they could swap small pallet-based loads, thus shortening journeys and ensuring lorries carried a full load both to and from delivery points. Hubs have become a model for the industry.

Pall-Ex itself now has an annual turnover in excess of £100 million. But it almost never got off the ground. "I'd not long started my business when the landlord revealed that the site we were using didn't have the right planning permission for storage and distribution. We got a note from the council saying they were pulling the plug," she recalls.

Rather than pack it in, Devey faced down the threat by defiantly phoning every Labour councillor in her area. "I said 'Are you going to put all these people's jobs on the line?' I got a stay of execution until I found new premises. I had to get through six months of turmoil and still had to motivate staff and put a front on. I needed those people."

The making of an entrepreneur

The story underlines Devey's approach to business. She peppered her speech with words like "tenacity", "enthusiasm" and "determination". For her, being an entrepreneur meant being utterly self-sufficient and working tirelessly to bring a "vision" to life, no matter what the obstacles.

"Not everybody has the same drive and staying power," she admitted. "Successful entrepreneurs have to be so good because there's no external support.

"You've got to take risk. You've got to have a small degree of arrogance about you and say 'Yes, I can do it'. Self belief - that doesn't cost anything."

Success wasn't without its price, however. A single mother, her son has had well-publicised problems with heroin. "I've had my challenges. You do blame yourself for that, but I think he now understands my work ethic and what I provided for him." It's a rare moment of self-doubt," she confessed.

But it doesn't last. Devey was quickly back to business, talking about her expansion into Italy and Eastern Europe and her plans to take Pall-Ex into fast-growing economies such as Malaysia, Russia, the United Arab Emirates and the Far East.

With such an entrepreneurial drive, why did she stayed in transport and logistics? Why not something more glamorous? "Once you're in, it's difficult to get out of," she explained. "It's one of the largest employing industries in the world."

When asked what she would have done if she hadn't stayed in transport and logisitics she confesssed, "I'd probably go into a service industry with a model I could franchise, with low capital expenditure and high returns," she says without hesitation. No frills, no nonsense, always the business brain tick-tick-ticking away.

From The Business Inspector to Dragons' Den and beyond

Devey replaced James Caan on Dragons' Den. It was a natural next step for one of the UK's highest-profile business figures. Devey herself was delighted with the appointment, saying: "I would have loved the opportunity to have stood before the Dragons, and I remembered my own experiences and the realities of running a business today, when choosing who to support - or reject."

Devey left the Dragons' Den after the screening of the tenth series. Her next move was to front the Channel 4 series The Intern, as well as presenting Hilary Devey's Women at the Top on BBC2.

Managing your time
Q&A: Family businesses
Eight reasons to start your own business when you graduate